IMPACT OF MUSIC ON YOUTH 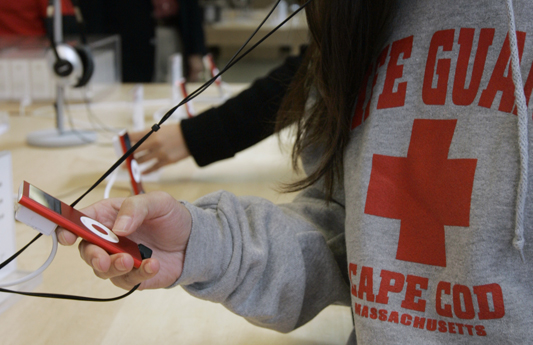 What’s on your iPod? (Ben Margot/AP)
Teenagers listen to an average of nearly 2.5 hours of music per day. Guess what they’re hearing about?
One in three popular songs contains explicit references to drug or alcohol use, according to a new report in The Archives of Pediatrics and Adolescent Medicine. That means kids are receiving about 35 references to substance abuse for every hour of music they listen to, the authors determined.
While songs about drugs and excess are nothing new, the issue is getting more attention because so many children now have regular access to music out of the earshot of parents. Nearly 9 out of 10 adolescents and teens have an MP3 player or a compact disc player in their bedrooms.
Studies have long shown that media messages have a pronounced impact on childhood risk behaviors. Exposure to images of smoking in movies influences a child’s risk for picking up the habit. Alcohol use in movies and promotions is also linked to actual alcohol use.
Researchers from the University of Pittsburgh School of Medicine studied the 279 most popular songs from 2005, based on reports from Billboard magazine, which tracks popular music. Whether a song contained a reference to drugs or alcohol varied by genre. Only 9 percent of pop songs had lyrics relating to drugs or alcohol. The number jumped to 14 percent for rock songs, 20 percent for R&B and hip-hop songs, 36 percent for country songs and 77 percent for rap songs.
Notably, smoking references aren’t that common in music today, with only 3 percent of the songs portraying tobacco use. About 14 percent of songs spoke of marijuana use, 24 percent depicted alcohol use, and another 12 percent included reference to other substances. About 4 percent of the songs contained “anti” drug and alcohol messages.
The study authors noted that music represents a pervasive source of exposure to positive images of substance use. The average adolescent is exposed to approximately 84 references to explicit substance use per day and 591 references per week, or 30,732 references per year. The average adolescent listening only to pop would be exposed to 5 references per day, whereas the average adolescent who listens just to rap would be exposed to 251 references per day.
Whether any of this matters remains an open question. While the impact of exposure to images of smoking and alcohol in film has been well documented, less is known about the effect of music on childhood risk behaviors.
Although music lacks the visual element of film, adolescent exposure to music is much more frequent, accounting for an average of 16 hours each week for music compared with about 6 hours each week for movie images, according to the study authors. But frequency of exposure is not the only factor. Unlike visual media, music is a powerful social force that also taps into an individual’s personal identity, memories and mood.
“Music is well-known to connect deeply with adolescents and to influence identity development, perhaps more than any other entertainment medium,” said the study authors.
Reader comment
I do not consider music as a threat to kids and/or teenagers. References to drugs and alcohol are made everywhere, bulletin boards, tvs, people around them. Music is a way for teens and kids to get away from the *day to day* routine and just have time on their own. Although kids and teens might pick up on the reference to substance use but the biggest responsibility here is not on the artist or the record company but on the parents. The artists are too often taking blame for a lack of discipline or education on the parents part. Kids and teens are smart and should be treated and educated accordingly. Discussions and sensibilities starts at home, not in schools but at home and it is a parent’s responsibility to abide.
Posted by MRS TEOH at 10:52