FROM UNSCHOOLRULES 2017
And I’ll never forget one of my favorite philosophy professors in college, who showed us Gattaca and The Legend of Bagger Vance and helped us think beyond the obvious to get at the hard questions about life inside them.

My daughter, Sarah, by her early teens was 10 times the media junkie that I was at her age. She watches literally hundreds of movies a year – probably close to one a day or more on average – and has watched her way through dozens of TV series in their entirety.
And that passion has fueled so much of our family’s learning. It goes beyond the obvious, too. Sure, she’s picked up a ton of history through films like Lincoln and Defiance, and about the space mission through From the Earth to the Moon. But it’s so much more than that. What about what she’s learned from The Matrix? The Wolverine? Mission: Impossible? Sherlock? She’s picked up just as much from those, and that’s why it’s been so important to me to get on my soapbox and talk about all the ways that learning from movies and TV happens in our home in this ultimate guide.
Learning from films is motivating and enjoyable
Motivation is one of the most important factors in determining successful second-language acquisition. Films and TV shows are an integral part of students’ lives so it makes perfect sense to bring them into the language classroom. Film, as a motivator, also makes the language learning process more entertaining and enjoyable.
Film provides authentic and varied language
Another benefit of using film is that it provides a source of authentic and varied language. Film provides students with examples of English used in ‘real’ situations outside the classroom, particularly interactive language – the language of real-life conversation. Film exposes students to natural expressions and the natural flow of speech. If they are not living in an English-speaking environment, perhaps only film and television can provide learners with this real-life language input.
Film gives a visual context
The ‘visuality’ of film makes it an invaluable language teaching tool, enabling learners to understand more by interpreting the language in a full visual context. Film assists the learners’ comprehension by enabling them to listen to language exchanges and see such visual supports as facial expressions and gestures simultaneously. These visual clues support the verbal message and provide a focus of attention.
Variety and flexibility
Film can bring variety and flexibility to the language classroom by extending the range of teaching techniques and resources, helping students to develop all four communicative skills. For example, a whole film or sequence can be used to practise listening and reading, and as a model for speaking and writing. Film can also act as a springboard for follow-up tasks such as discussions, debates on social issues, role plays, reconstructing a dialogue or summarising. It is also possible to bring further variety to the language learning classroom by screening different types of film: feature-length films, short sequences of films, short films, and adverts.
Defiance: This is in some ways the most “obviously educational” movie on our list; it’s the story of the Bielski brothers, who led a Jewish resistance camp in the forest during World War II. Interestingly, Sarah originally wanted to watch it because it stars Daniel Craig of James Bond fame, and it ended up sparking a huge interest on her part in World War II.
Valkyrie: This is another vote for “If your kid has a favorite actor, watch all their stuff.” Sarah loves Tom Cruise, and she had gotten into World War II after seeing Defiance, so this look at a failed assassination attempt against Hitler also caught her eye. We talked a lot about whether Hitler “deserved” to die, whether he was mentally ill, whether it was right for people to try to kill him, and a lot more.
Wild, Wild West: OK, hear me out on this. This one is cool because it gave us a chance to talk about what isn’t real and true historically, which naturally led us to talk more about the truth of western exploration.
RENT: This was a serious one. We talked about the AIDS epidemic in America, how people with AIDS were perceived in the ’80s and ’90s versus today, what AZT does, drug abuse, gender roles and probably a bunch of other stuff I’m forgetting. If you have mature kids who can deal with these kinds of issues, and you’re willing to get honest with them, this is an incredibly moving and interesting movie. 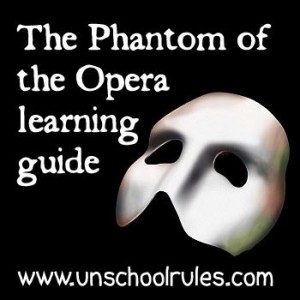 The Phantom of the Opera:  Even cooler, earlier this year we went to see this show on Broadway. AMAZING. Lots to talk about here, from social issues (Do mistreatment and abuse “make you bad?”) to French culture to opera to ballet to how Broadway shows work to why certain TV or movie adaptations of literary works diverge from the original text while others don’t.
Les Miserables: This was great! We got into this because Sarah loves Hugh Jackman as Wolverine. (We also watched his version of Oklahomaas part of our musicals kick.)
Posted by MRS TEOH at 02:27